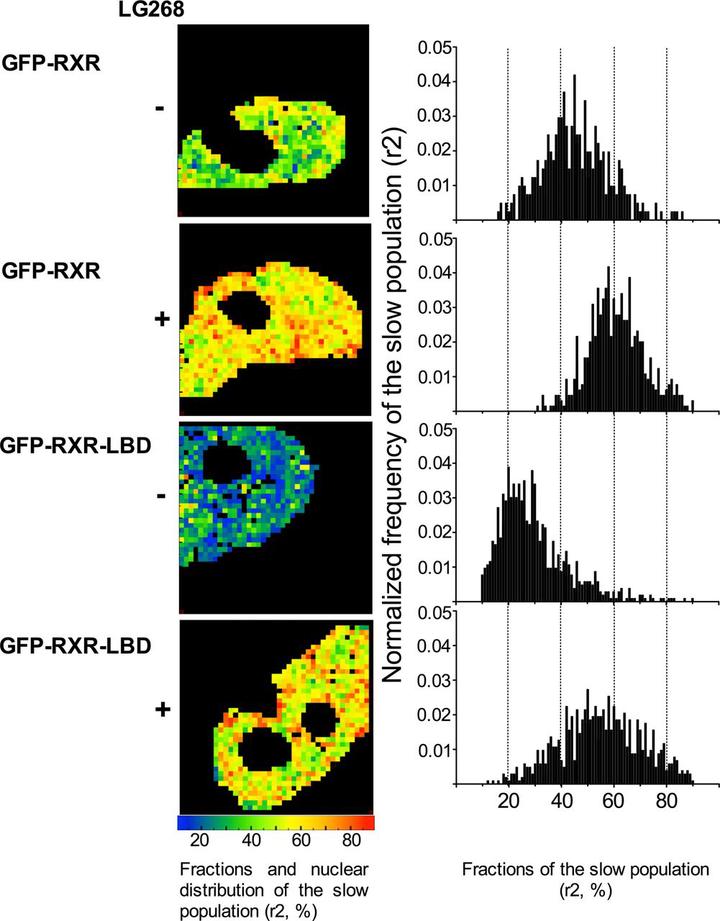 SPIM-FCS reveals a homogenous ligand-induced transition of RXR to the slow state in the entire nucleus.

Retinoid X receptor (RXR) is a promiscuous nuclear receptor forming heterodimers with several other receptors, which activate different sets of genes. Upon agonist treatment, the occupancy of its genomic binding regions increased, but only a modest change in the number of sites was revealed by chromatin immunoprecipitation followed by sequencing, suggesting a rather static behavior. However, such genome-wide and biochemical approaches do not take into account the dynamic behavior of a transcription factor. Therefore, we characterized the nuclear dynamics of RXR during activation in single cells on the subsecond scale using live-cell imaging. By applying fluorescence recovery after photobleaching and fluorescence correlation spectroscopy (FCS), techniques with different temporal and spatial resolutions, a highly dynamic behavior could be uncovered which is best described by a two-state model (slow and fast) of receptor mobility. In the unliganded state, most RXRs belonged to the fast population, leaving ∼ 15% for the slow, chromatin-bound fraction. Upon agonist treatment, this ratio increased to ∼ 43% as a result of an immediate and reversible redistribution. Coactivator binding appears to be indispensable for redistribution and has a major contribution to chromatin association. A nuclear mobility map recorded by light sheet microscopy-FCS shows that the ligand-induced transition from the fast to the slow population occurs throughout the nucleus. Our results support a model in which RXR has a distinct, highly dynamic nuclear behavior and follows hit-and-run kinetics upon activation.